You are here Home » Treatment in turkey » Antalya

Antalya was the site of one of the oldest settlements in Anatolia. Twenty-five kilometres to the northwest of Antalya’s centre is Karain Cave, once home to a community of eighty people, with evidence that its history goes back to the Paleolithic Age.

The cave was discovered during research conducted on the surface between 1946 and 1958. Some objects in the cave were dated as being one million years old.

The region was under the control of the Hittite Empire between 1400 B.C. till the fall of the Hittites, many independent states were established in the region. Between the 11th and 8th centuries BC, first the Lydians and then Persians ruled the region.  In the 4th century BC it was Alexander the Great’s turn to conquer the region. In the period following his death, the province changed hands a number of times, because of conflict between his generals for control of the region.

The King of Pergamon, Attalos II (159-138 BC), seized the natural port of Pamphylia, the city of Antalya, and took over control of what is now the site of the present day. The city was named Attaleia after him. In 67 BC the city was subsumed into the Roman territory, becoming prosperous under Roman rule.

The city became a centre where Christianity spread to the Anatolian soil. However, in the 7th century there were continuous attacks by Arabs on Anatolia and the Antalya region. In 652, the Byzantine navy lost a major naval battle against Arab forces fought in the waters off Antalya. 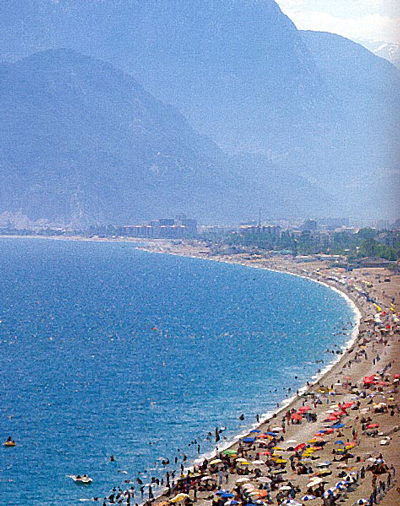 The Antalya region’s next encounter with Islam was during the Seljuk period, with the capture of the city in 1085.  The city changed hands between the rulers of small kingdoms until 1426 when it fell to the Ottomans. The last invasion of the city was by Italian forces between 1919 and 1921.  On 5 July 1921 the invasion ended and Antalya became a city of the young Turkish Republic. For many years the economic activities of the city were based on the growing of fruit and vegetables in the mainly agriculture area, as well as fishing and maritime. Today it is the largest tourism centre of Turkey and the Eastern Mediterranean.

The high Tauros Mountains running parallel to the coast in particular formed a natural border to central Anatolia, one that could not be crossed in the winter. This geography was an obstacle to the forming of a larger union of states so instead rich city states on the coast were established, often controlled by a higher central authority. Moreover, with its agricultural richness and natural ports, the region attracted many settlers. This is why so many civilizations thrived in the region and left their historical heritage.

In the western part of Antalya one of history’s first major confederations, the Lycian Union, was formed. This league, once the most powerful in the region, had its member states represented by a system of one, two or three votes, depending on the size and importance of the states. Starting from the west end of present day Antalya and stretching to Fethiye in the province of Muğla, it covered a very large area for those days. To the east stretched the state of Pamphylia, the “Land of all Tribes”. 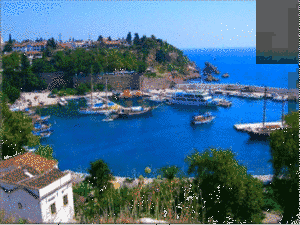 The region with its steep mountains falling to the sea with just limited coastal plains had long drawn pirates. The pirates did not just confine their activities to capturing and looting merchant ships but also from time to time they took control of and ruled whole cities.

We mentioned that the region was where Christianity first spread to Anatolia. Many churches, chapels and other buildings dating from the early Christian era can be seen at various historical sites. The museums of the region have a wide collection of pre-Christian and Christian as well as Islamic artifacts. One of the world’s best known figures, St. Nicholas, otherwise known as Father Christmas, was from the region of Antalya.

Many myths, local legends and a rich history have survived from the area’s past to the current day.

We wish you a nice vacation in Antalya.

This website uses cookies to improve your experience while you navigate through the website. Out of these, the cookies that are categorized as necessary are stored on your browser as they are essential for the working of basic functionalities of the website. We also use third-party cookies that help us analyze and understand how you use this website. These cookies will be stored in your browser only with your consent. You also have the option to opt-out of these cookies. But opting out of some of these cookies may affect your browsing experience.
Necessary Always Enabled
Necessary cookies are absolutely essential for the website to function properly. This category only includes cookies that ensures basic functionalities and security features of the website. These cookies do not store any personal information.
Non-necessary
Any cookies that may not be particularly necessary for the website to function and is used specifically to collect user personal data via analytics, ads, other embedded contents are termed as non-necessary cookies. It is mandatory to procure user consent prior to running these cookies on your website.
SAVE & ACCEPT